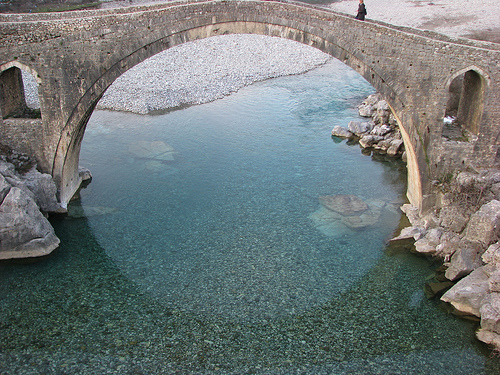 Albania is not that small but with a good Albania travel guide and a car, you can visit all its top attractions in few days only but it is crucial to start your Albanian tour either on the southern or northern tip of the country. A few day trip is, of course, not enough to truly experience the country’s beauty but enough to visit its prime attractions and perhaps spent a day or two on its beautiful coast as well.

If you enter Albania from Greece, you do not have to drive far to reach one of the country’s greatest treasures – Butrint National Park. It is a UNESCO World Heritage Site and one of Albania’s most important archaeological sites. Butrint is famous for splendid ancient Greek and Roman ruins which include a Roman amphitheater, public baths, early Christian basilicas and many other structures that reveal its rich history. A reconstructed castle on the top of the acropolis hill houses objects that were excavated on the site.

Less than 50 kilometers north of Butrint is another UNESCO World Heritage Site – Gjirokastër or Gjirokastra marked by remarkably well preserved Ottoman architecture. Most of its buildings (which are still inhabited) date to the 17th and 18th centuries.

Tirana, the capital of Albania is situated somewhere in the middle of the country and is worth visiting as well. Some of the most popular tourist destinations in Tirana include Et’hem Bey Mosque and the nearby Clock Tower of Tirana, Enver Hoxha Mausoleum, National History Museum, Tanners’ Bridge, Petrela Castle and Skenderbeg Square.

The city of Shkodër is one of the oldest towns in Albania and home to a lovely Mes Bridge across the Kir River and spectacular ruins of the Rozafa castle. It is located on the Shkodër Lake (on the border with Montenegro), a popular summer destination for both the locals and tourists.

Albania - Getting In and Around